After a whole (half-)summer of translations, I have one I'm kinda proud of. It has a few awkward moments, but it's a pretty good indicator of how we do things. A "Taste of TASS," if you will. Even though this wasn't a TASS poster per se, it was written by Demian Bednii, who frequently wrote for the TASS posters. So I guess this falls under the denomination of TASS-related, but oh well. Check it: 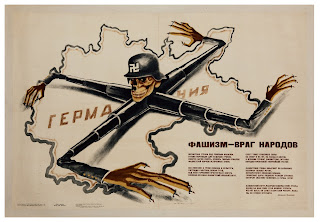 Unfortunate country under the deadly heat.

Getting the corpses ready for future graves,

The Fascist decay of worn-down teeth.

Еverything desecrated! In dirt is freedom and culture,

Into oppressive slavery is labor bound.

Onto all of Germany a figure is spread

The octopus pulls its furry paws

To the north and south, east and west.

In Spain, the Fascist satraps are stunned,

The persistent germ of the People's Front.

The Fascist messengers dart all over the Balkans,

Who want to emblazon a swastika in their coat of arms

The fascist octopus, opening up the hope of its mileposts,

Began to furiously trumpet a march into our Union.

So what? Let him thrust his four paws at us,

We'll be able to chop them off!