First day of Drawing Center Internship: complete. It's surprisingly enjoyable, even though it's (unbearably) unpaid and I'm largely stuck in a corner doing research. But when I think about it, it's something I would be doing anyway; at the moment I'm preparing dossiers of artist info for a few modern and contemporary artists, none of whom I've heard of. And it's fascinating, especially when you come across something that interests you.

In today's case, it wasn't art that peaked my interest, but the lifestyle of an artist. K8 Hardy (it took me an embarrassingly long 5 minutes to realized it was pronounced "kate") is a writer, installation-maker, artist-filmmaker, and what I guess you'd call a "zinester" who used to be a punk involved in the Riot Grrrl movement in the early 90s. I guess it isn't much of a surprise that she went to Smith College and majored in Women's Studies. 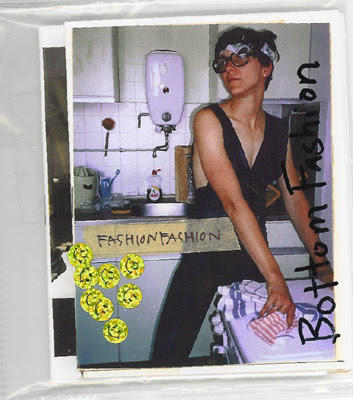 (As if it wasn't enough that most of my favorite people at Columbia are bisexual in some way! Then again, according to Alfred Kinsey, that's only natural, and the vast majority of us are at least slightly bi-curious. Then again, isn't there something undeniably fashionable about lesbians? And is it not horribly cliche that I'm listening to Le Tigre right now?)

Take this excerpt from an interview with K8 Hardy I found on some zine/blog while doing my research today:

I am aware that you studied film and art at college. Before you took an academic interest in experimental art, how did you get started and become interested in art?
I actually have a degree in Women's Studies, with a specialty in feminist and queer theory. I became interested in art once I was really exposed to contemporary art at Smith. I had no idea it existed while growing up in Texas, but I was involved in the Riot Grrrl Movement and made tons of zines. Retrospectively, I can see this as the start of my art practice, but it took me awhile to realize that I was an artist. It actually shocked me! Once I started making experimental video, I got rid of my guitars, realized I was probably tone deaf, and that this was more productive. The artist Elisabeth Subrin was one of my professors and totally cracked my world open to feminist work. It's also my experience making zines and being a punk, being involved in DIY communities that made me an artist. I then took it upon myself to pursue these studies outside my degree. For example, I got a grant when I was 19 to work for Miranda July and the Northwest Film Center in Portland, Oregon. I also worked at Artists' Television Access in San Francisco.

I could analyze this to no end (what does it mean to be a punk? how does one be an artist? how does one all the sudden "realize" that one is an artist, as if it was a state of mind?) Personally I tend to find arguments and situations like Hardy's a little hard to believe. You can't deny the inevitable aesthetic qualities in art. I don't even really like Hardy's performance art, but I find it fascinating-- if only because it is so ridiculously stereotypical. Hardy exemplifies every lesbian cliche.

Regardless, I am now more inspired than ever to start a zine. My friends Kirsten and Katie and I are hoping to start a travel ("mariner")-themed zine, hopefully by the time summer rolls around. There's hope yet!

Other major discovery of the day: artist rankings, in which all artists, living and dead, are rated based on factors such as internationality, cities (locale of exhibits), institutions, and exhibitions. Very bizarre, and somehow feels ethically... wrong. Especially when a Miro or Ernst is rated above a Dali! And somehow Warhol is #1 instead of Picasso (#2)? And Koons is in the 60s, and Murakami is something like 106?
Posted by Julia Alekseyeva at 5:45 PM No comments:

Haven't had much time to update in a while. New semester, you know how it goes. I also have an internship at the Drawing Center, so expect more pretentious blog entries examining contemporary art exhibits in SoHo. Should be exciting!

I've been wanting to write something about fashion for a very long time, and it came to me sometime over New Year's, when I dressed as a punk rocker for my stereotype-themed party: fedoras. I bought one in Paris, a solid and signified black one, and some girls' immediate reactions were: "That hat is so hipster!" I disagree.

For two, the main character of Godard's Breathless, inspired by Bogart.

Thus we move from the 40s to the 60s and then the late 70s, when we see Paul Simonon of the Clash wearing a fedora.

And then we have present-day, when the fedora has become a staple of the edgy haute couture industry. For the sake of beauty, and proving that fedoras are indeed the essence of cool, I've made a compilation of my favorite fedora-wearing outfits from the Sartorialist, HelLooks, and various other places. Enjoy! 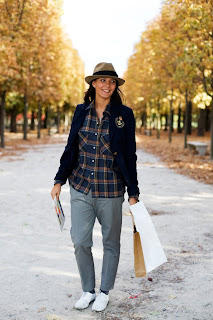 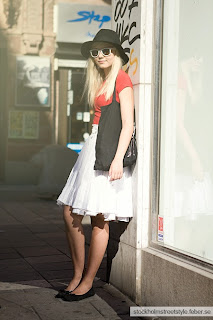 This one with the white skirt is my favorite. 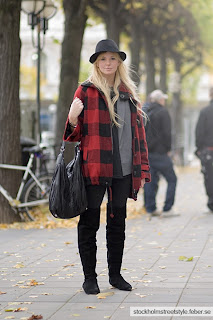 I have a jacket just like that! 5 pounds from London's Primark, a steal if I ever saw one. 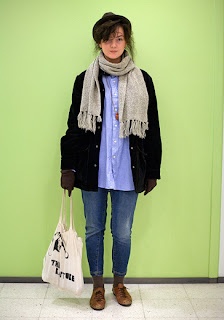 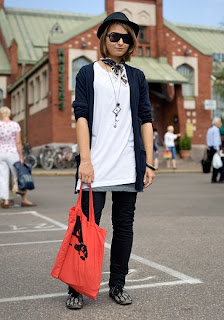 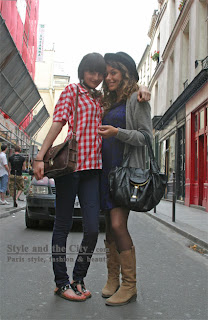 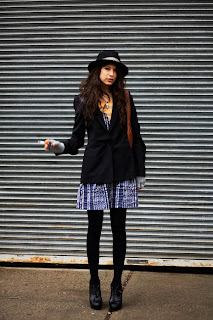 Unfortunately I don't look quite as cool... 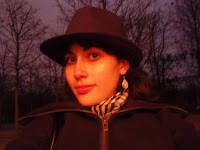 ...but I still really like hats.
Posted by Julia Alekseyeva at 1:50 AM No comments: 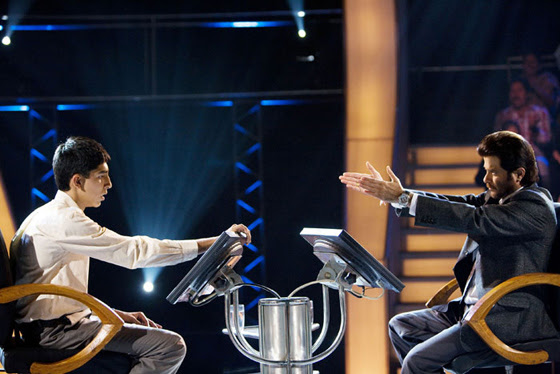 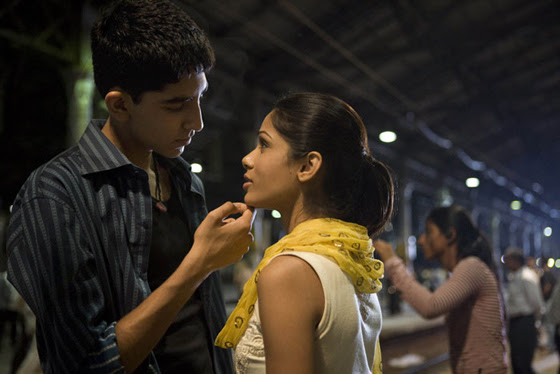 A boy from the slums of India, orphaned and living with his elder brother-- literally in piles of garbage--suddenly finds himself one question away from being a "millionaire" on India's version of Who Wants to Be a Millionaire (except the million was 20 million rupees, about the same amount). The question is: did he cheat? With absolutely no formal education, Jamal is a "slumdog," a streetkid, bound to grow up as a no-good thug--but with a good heart (in pure fashion). Through a brilliant and seamless series of flashback/cut-to-the-present/flashback/cut-to-the-present, director Danny Boyle (Trainspotting, 28 Days Later, Sunshine) presents a gorgeous and intimate story. Film kids call this film cheesy, to which I reply, in pure 5th grade fashion: "who cares, you're just jealous." This movie is quite near cinematic perfection. You don't need to be a David Lynch or David Cronenberg to make a good movie. Just because a film isn't reserved for the academic elite does not mean that it is not worth watching. Hell, Slumdog Millionaire was the best movie I have seem since... well, probably the Dark Knight (yes, it was that good). Of course, I am a sucker for style, and both the cinematography and music selection was breathtaking (I believe Slumdog won the Golden Globe for music as well as best picture-drama). From the first sweeping low-angle shot of riding motorcycles, with halos made from the reflection of natural light on the lens, I was hooked. M.I.A. was used at least twice-- once during a scene that perfectly illustrated the lyrics ("Paper Planes": "sometimes I think sitting on trains," when the two brothers are actually sitting on a train), something a bit ridiculous but ultimately endearing. Strangely enough, although they use M.I.A. (oh M.I.A., you sneaky Sri Lankan revolutionary, you), feature Muslim/Hindu rivalries in , focus on globalization and reconstruction as well as gang fights, the film remains strangely apolitical. It focuses on the human rather than burdening it with politics (it would just have been too much). Yes, without a doubt, I would recommend that everyone see this film (.... and I have, to several a wandering passersby near the Landmark). To those that claim its cheesiness, for chrissake, Boyle is a master of all genres, including faux-Bollywood tearkers. There's a reason they call them feel-good movies; it's as if optimism has suddenly become a mark of stupidity for our generation. Claiming this movie as so-called "cheesy" is inevitably due to film school insecurity and the inability to really enjoy a great movie when it's placed in front of you. So man up and grab a tissue, for cryin' out loud.

Posted by Julia Alekseyeva at 2:13 AM No comments:

The Curious Case of Benjamin Button 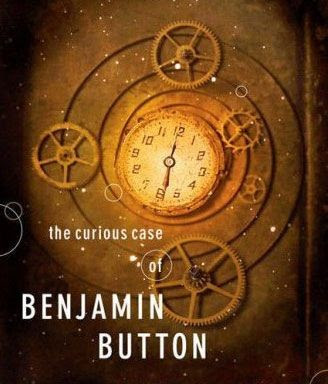 Seeing that this film has as its premise a short story by F. Scott Fitzgerald, I was both enthusiastic and doubtful. For one, it seemed a brilliant magic realist plot: a boy, more resembling an old man, is born, and ages backwards with time. After all, the best magic realism is simple at heart (an adult man spontaneously growing wings, another the most intelligent being possible). The problem with magic realism is that it is absolutely impossible to transfer onto film successfully. Perhaps the most succesful to date was Pan's Labyrinth, but even that story was more fantastical than realist. Giving it a moving picture denies it of a certain spark that could only be reached via short story (and there's another reason that magic realism is mostly in short story, as opposed to novel, form). Thus, a beautiful and moving premise is rid of its magic and becomes another uninteresting Hollywood tearjerker. Brad Pitt, however, is brilliant as Benjamin Button, and Cate Blanchett sparkles as his love interest Daisy, only momentarily the same age. There are great things in this movie... the acting superb, the mise-en-scene breathless (pause this movie at any point and it's straight out of a National Geographic photograph). But with the same writer as Forrest Gump, some things are bound to get cliche (even when it worked seamlessly in the early '90s). Plus, the music is uninteresting, and makes you wonder why John Williams didn't attempt to work his big-budget movie magic here. Thus, Benjamin Button becomes a standard tearjerker, much longer than necessary, building up to a Hollywood climax that never occurs-- an expensive and opulent disappointment. Of course, I'm exaggerating a bit, and surely the film is better than many. It only fails because of how earnestly it attempted greatness; it might, at the very least, be worth a view.
Posted by Julia Alekseyeva at 2:57 PM 1 comment: