Can't wait to see this film about William S. Burroughs. Too bad the screening and afterparty is $60...

A preview quote from the article:

"Burroughs also spent some formative years on the shores of Lake Michigan, though he didn't speak as fondly of them. In a passage he later excised from Naked Lunch, he wrote, "There is something about Chicago that paralyzes the spirit under a dead weight of a formalism dictated by hoodlums, a hierarchy of decorticated wops . . . And everywhere the smell of atrophied gangsters, the dead weight of those dear dead days hanging in the air like rancid ectoplasm . . . You suffocate in the immediate past, still palpable, quivering like an earthbound ghost . . . Here the dream is suffocating, more real than the real, the past actually, incredibly, invading the present."

Note to self: read "The Naked Lunch." Also, upon reading the wiki on Burroughs I find it hilarious that he went to my former roommate's preparatory high school in St. Louis, if only because most of my fellow Von Steuben MSC graduates in Chicago become gangsters, drug-dealers, and, at best, middle-managers at downtown corporations.

Also I'm definitely regretting my decision not to take the Columbia seminar on the Beat generation. REGRET!
Posted by Julia Alekseyeva at 10:29 AM 2 comments:

The blog-- named "Chicken Nugget Lemon Tooty"-- was founded by a dad to show off the drawings of his three kids: Isaac, Grace, and Lily. The dad is an illustrator, and very often makes it clear how much better his kids are at drawing than most (trained) adults. You know what they say: "The best artists are either children or crazies." If Unica Zurn is the best artist "crazy," then these kids are astounding examples of the former variety. Yet I can't shake away the thought of how normal these kids are, and how, with good guidance from adults, any child can make drawings as fantastic and innovative as these. And I also can't help but think of how much "trained" illustrators lag in comparison to the kid drawings, as if there is an element that cannot be reached after the age of 10. Depressing, almost. Especially when, as in the most recent anniversary entry, illustrators have their work side by side with the kids' work, whose drawings they attempt to emulate. And how boring the professional illustrations are. 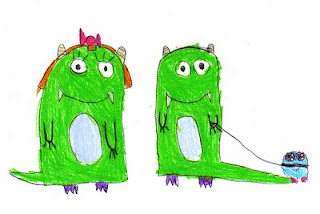 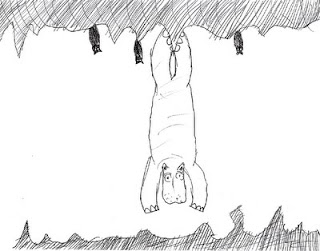 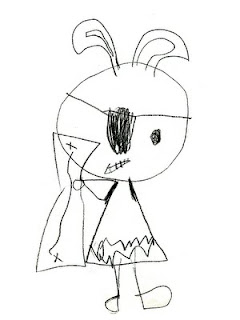 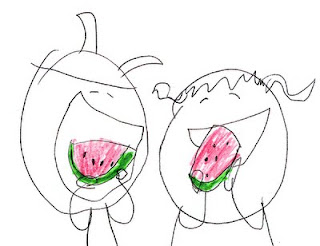 And, of course, inspired by my favorite children's book ever (and now an upcoming movie whose soundtrack is being compiled by Karen O and is officially one of the "stuff white people like"): 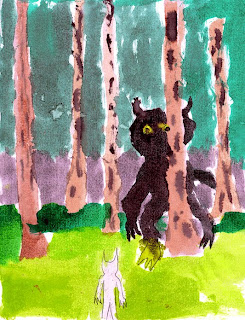 Posted by Julia Alekseyeva at 9:01 AM No comments:

Generous humanist that he was, Hughes was that rare adult who took teenagers just as seriously as they take themselves, and the result was a movie in which the five main characters – the brain, the jock, the princess, the criminal, and the basket case — pursue nothing more compelling than self-awareness and the public revelation of thoughts and feelings once consigned to diaries and psychologist offices.
--Greg Beato on The Breakfast Club

Remember Sixteen Candles, when Molly Ringwald's character wishes for a birthday with "a pink Trans Am in the driveway with a ribbon around it, and some incredibly gorgeous guy that you meet, like in France, and you do it on a cloud without getting pregnant or herpes"? I've forgotten how wonderful these movies are.
Posted by Julia Alekseyeva at 10:26 AM No comments:

I've watched enough Hayao Miyazaki films over the years to finally piece together what they have in common. For one, all Miyazaki films are deceitfully childlike. They're "kids movies," yes, but only in the sense that children can enjoy them just as much as adults. Otherwise they are far too complex to fall into the generic Disney category, and even though I love Disney movies as much as the next person, there is a psychological complexity to Miyazaki that Disney can never reach. Even though Miyazaki's latest, Ponyo, is an alleged "Disney" film.

Ponyo is, at its simplest, a story about a magic goldfish who wants to turn into a human. The goldfish accidentally meets a young boy named Sosuke, and when the goldfish-- now named Ponyo-- is retrieved by her father, hell breaks loose, and Ponyo now has an insatiable desire to become human. Nature's delicate balance is upturned, and a storm threatens Sosuke's quaint seaside village. On top of this is a backstory of "evil" witches and wizards, a small oceanside community in Japan, a family, and even the role humans play in the environment. Which brings me to my second point: all Miyazaki films have an environmentalist undercurrent (my favorite-- Princess Mononoke-- does this more than any other). Miyazaki films praise the wilderness, the beauty of evolution, the spirit of animals, and declaim traits that are often thought of as "human"-- greed, corruption, love of money, egotism. It's almost transcendental, almost romantic. Think of the moment in Spirited Away when the temple workers throw themselves onto the floor in want of gold. It is hard not to look at this without disgust.

Although greed and corruption are seen as terrible forces, Miyazaki still seems to believe that humans-- all humans, even what is seemingly the lowliest creatures-- are good at heart, and capable of being understood. It is the want of understanding that is at the core of "evil" characters' desires. In Ponyo, it is unclear how "evil" Ponyo the Fish's father is, although he is referred to as an "evil wizard". Just as The Little Mermaid is about a mermaid who goes against her father's wishes in the quest of becoming human, Ponyo is a goldfish who goes against her father's human-hating ways. In that sense, Ponyo is another Little Mermaid story... but humanized. Unlike all other Disney films that I've seen, Ponyo has no evil villain, because every thing on earth-- human, animal, or any hybrid in-between-- is endowed with an inherent goodness. It's refreshing, powerful, and overwhelming. Give me Hayao Miyazaki over Walt Disney any day.

The film itself is, though not the best of Miyazaki's extensive repertoire, delightful. The animation is beautiful, as always, and this time, nothing was lost in translation (Disney did the annoying dirty work of the translator). Like all Miyazaki films, even the older audience members are often lost in the almost surrealistic quality of the story-- where is reality? Where is fiction? Where does magic meet our perceived world? Herein is the Miyazaki charm, in that same magic realism that suspends our disbelief, if only for a few hours. Something so strange, enlightening, and wonderful is rarely found, so go see it! Posthaste!
Posted by Julia Alekseyeva at 5:08 PM 1 comment: