However grim this poem is, it never fails to cure a sour mood. And boy, is that mood sour these days.


My friend tells me
a man in my house jumped off the roof
the roof is the eighth floor of this building
the roof door was locked how did he manage?
his girlfriend had said goodbye I'm leaving
he was 22
his mother and father were hurrying
at that very moment
from upstate to help him move out of Brooklyn
they had heard about the girl

my friend was not interested he said you're always
inventing stuff what I want to know how could he throw
his life away how do these guys do it
just like that and here I am fighting this
ferocious insane vindictive virus day and
night day and night and for what? for only
one thing this life this life 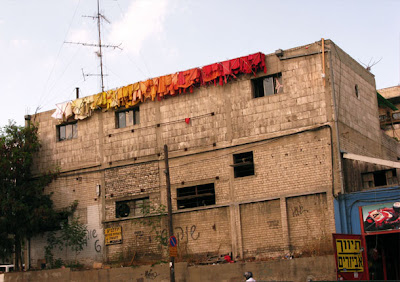 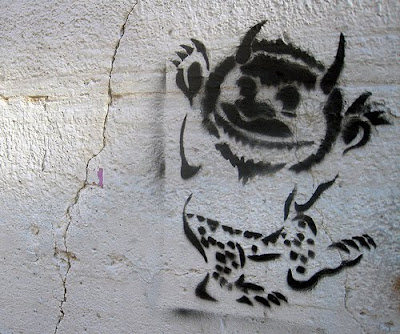 Also, while scrolling through Brooklyn Street Art I happened to come across this: 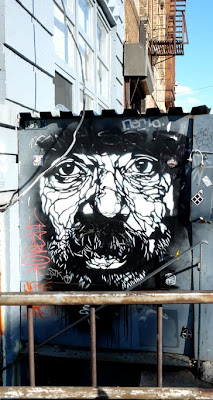 I saw this same stencil in Amsterdam, over a year ago, somewhere in the vicinity of the Anne Frank House. Strange to think the graffiti artist now resides in Brooklyn, at least temporarily. One of those things that, when you encounter, makes you feel the true interconnectedness of all things. Or something. Here is the picture I took from last fall: 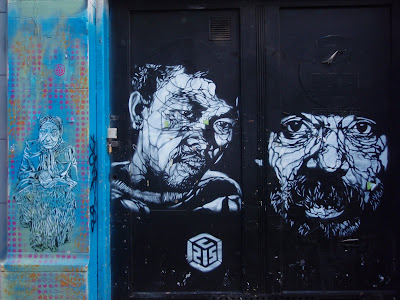 Fantastic editorial in the Times today by Judith Warner about the "Bo-Tax" on the health reform bill, a provision that would tax cosmetic surgery by 5%.

I'm not sure whether it is studying abroad that made me particularly sensitive to sexism, but I am starting to see it exacerbate, even beyond 1990s standards. Watching the FIFA world cup draw this weekend was surprisingly painful: I was struck by Charlize Theron's mindless portrayal of a glamour-girl dumb blonde. Theron, an intelligent, worldly actress who has acted in countless psychologically and physically varied roles (i.e. "Monster"), was paid to saunter around the stage in a red ballgown, being fondled by weird soccer players (and Beckham, with that ridiculous haircut!), and occasionally commenting about her alleged idiocy to the completely uncharismatic Frenchman next to her. As a friend noted, if it had been an African American man acting dumb in front of the so-called distinguished European, there would be outrage in the streets, and not without reason. Why a female/male relation on the stage should be any different is another story altogether...

Why not have Theron in a more soccer-friendly or professional getup? Why use a woman at all? And why not use a knowledgeable woman soccer pro, paired with an ignorant male Hollywood Star? Would this blatant misogyny occur if it was set in America and not South Africa? (Probably)

In any case, the point of Warner's editorial was to show the lunacy of a woman's right's group complaining about this amendment, as if plastic surgery were not a symptom of society's decline into Mad Men-era misogyny.

In any era where almost half of females fear becoming a "bag lady," and women are transformed again into the "mindless-boob-girlie symbol," Warner writes:

This is what happens when equal pay stalls, abortion rights wither, and attempts to improve child care and workplace flexibility die on the legislative vine year after year. Women’s empowerment becomes a matter of a tight face and a flat belly. You control what you can control. And so many middle-aged women feel particularly out of control now, as indeed they are, in these life plan-wrecking economic times.

Right on.
Posted by Julia Alekseyeva at 12:49 PM 3 comments:

Was mentioned in the Spec today, after having a drawing in Postcrypt's Obstacles show. Not quite my 15 minutes of fame, but I'll make do. The drawing was really last Spring's Figure Drawing final project, but they don't need to know that. It's flattering to be the only artist mentioned directly in the article, but did they really have to make me sound pretentious? The writer's tone is almost mocking. Also a little embarrassed by the advertisement for my Tuesday comic, but... alas.

Also, kind of weird to be referred to by my last name. Especially since so few people are able to pronounce or even spell it. That said, the Postcrypt show this weekend was interesting. Frankly I love Potluck far more than St. Paul's Cathedral, and I hate gallery settings anyway. The purple string obstacles were the best part: interactive art! That said, most of the art, including (probably, maybe, most likely) my own, was largely disappointing (i.e. sucked).

Despite their displacement, Postcrypt Art Gallery has collaborated with Potluck House to curate their last show "Obstacles."

For the first time in almost 20 years, the Postcrypt Art Gallery is homeless after being kicked out of the basement of St. Paul’s Chapel.

The reason behind the eviction was simple, even silly: Hammer-happy members had put too many holes in the walls while hanging up their artwork. Earlier this year, the University Chaplain confronted Postcrypt about the damages, resulting in a compromise in which Postcrypt paid for part of the cost of repainting the basement’s walls. After the discovery of more holes, however, Postcrypt was sent looking for alternative spaces to host events, at least until next semester, when it will be reinstated in its old home.

Although this led to the cancellation of one show and the postponement of another, Postcrypt managed to organize one last event in collaboration with Potluck House and the Columbia University Undergraduate Film Festival this semester. The title of the show, “Obstacles,” seems to be a snarky reference to the obstacles they had to overcome in light of their experience with St. Paul’s. But the president of Postcrypt, Ian Kwok, CC ’11, said, “We had conceptualized the show before the incident.” Kwok also said, “It was really nice to see how many groups reached out to us” during Postcrypt’s hunt for an exhibition space, and that Potluck House was eventually chosen because of its “different vibe.”

While the description of the event on Facebook was somewhat lofty (“Life is full of barriers. … Sometimes these obstacles can be physically circumvented and other times they exist on a more intangible level”), entrance to the first room immediately revealed that the night would be anything but pretentious. A thick cobweb of purple yarn intersected the room at bizarre angles, forcing visitors to crawl through awkwardly to reach a spread of food prepared by Potluck House residents.

Once through, comfortable couches were arranged at ideal angles for watching the strange—and usually hilarious—contortions of others. This room also featured a large-scale drawing by Julia Alekseyeva, CC ’10 (who also draws a comic for Spectator) which depicts nude models, obscure quotes, and emblazoned in the middle, the line “I can’t do this on my own.” Alekseyeva said she had meant to make the work “slightly disconcerting” in order to reflect the “anxieties and obstacles” attached to modern life.

This same shade of gloominess ran through the other artwork featured on the walls of all three floors of Potluck House. It extended to the films screened by the Undergraduate Film Festival, which were shown on the second floor. Co-president Vicky Du, CC ’11, explained that the films had been carefully selected to complement the art exhibition, resulting in a series of very short, silent films with sharp aesthetics.

On the top floor, Feel Good Inc. served Brie and apple grilled cheese sandwiches. Those weary from the three-story climb were treated to delicious food with a humanitarian aim—raising money and awareness for the Hunger Project.

Postcrypt Art Gallery’s exile led to a fortuitous collaboration with other student groups, resulting in a dynamic and multifaceted exhibition. Potluck House’s communal spirit does add a new spin. Its friendly, relaxed space helped to achieve Kwok’s goal of reorganizing Postcrypt into a “more dynamic, active place of convergence.”

Posted by Julia Alekseyeva at 10:58 AM No comments: 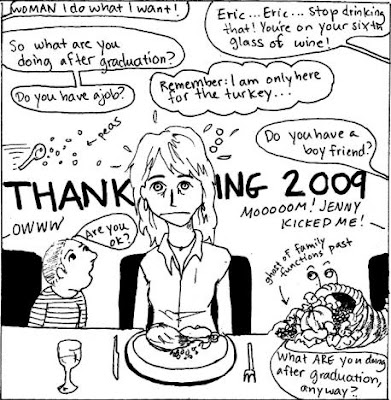 I cannot even communicate how much life sucks right now.
Posted by Julia Alekseyeva at 4:23 PM 2 comments: