Where the Wild Things Are

I have been looking forward to this film for almost a year, ever since the trailer made the Facebook rounds last winter. I've been obsessed with this book from the age of 5 at least, although when I first read it I knew no English but still liked the pictures. I bought a Wild Things shirt no less than 6 years ago, and still wear it often. What kid doesn't empathize with Max?

My friend Paul brought up the point that the film is so trendy because it caters to our generation's nostalgia, which I think is completely true. I went to three theatres before I found a show that wasn't sold out, and in each theatre I noticed not a single child (they were there, somewhere, perhaps). Going to see Wild Things was like drowning in a sea of plaid oxford shirts and skinny pants. Even the trailers were specifically catered towards the indie crowd (Wes Anderson animation? Count me in, and 1000 of my closest friends). Perhaps it's because I'm in Manhattan, which seems to be some sort of subculture epicenter. And yet, why wasn't I annoyed? Did I actually enjoy being part of some kind of cultural movement? Maybe. All I know is I freaking love Wild Things.

Karen O's soundtrack was obviously incredible, Dave Eggers's script was obviously incredible, Spike Jonze's direction and cinematography was obviously incredible. But boy, I think the vast majority of interactions in this movie would be completely lost on a 6-year old. And it was dark, even for me (who has a Clockwork Orange poster over her bed). There was many a time when I was literally scared to death that Max would be eaten by the wild things. Thus, this is a film practically perfect for college-age kids, but frankly I think anyone under the age of 10 would find it incredibly disturbing. Where the Wild Things Are takes PG-films to a completely different level. Even considering films as rich and unique as Disney/Pixar's Up!, other so-called "kid's" movies simply don't stand a chance against Wild Things. It's a cultural phenomenon!

That said, go see it, and let the wild rumpus start!

Edit: A late comic strip about Where the Wild Things Are. 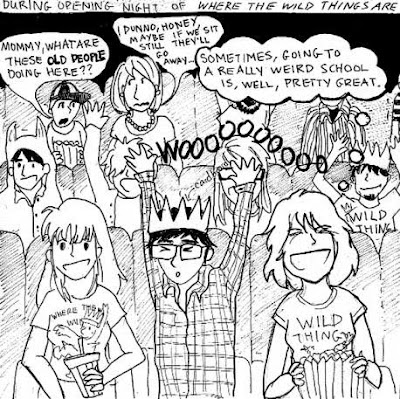 Also fun to read (although I hate the guy): David Brooks over-analyzes the Wild Things

Posted by Julia Alekseyeva at 4:30 PM No comments: 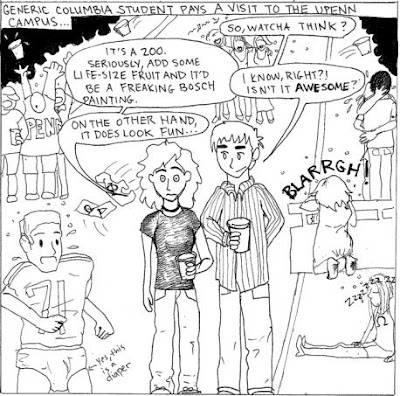 Ok, I guess the comic is becoming entirely autobiographical. This is based on last weekend's trip to UPenn to visit my friends Nate and Jon. The kid above is some amalgamation of the two.

That said, regardless of the critiques drawn above, UPenn is an awesome school, and I would be delighted to go there for grad school *crosses fingers*. That said, I'd be delighted to go ANYWHERE for grad school ('cept the South). Well, anywhere in a major metropolitan area, in a blue state. Except LA. This limits my choice to exactly 8 schools (out of the 40-some comparative literature programs in the country), all of which I am applying to, and none of which are, quote on quote, "safety schools."

So yeah, Penn would be pretty great.

I just realized that this cartoon is particularly relevant because of Homecoming against Penn. Ha. How accidentally "school spirit" of me.

EDIT: HAHAHAHAHAHAHAHA. Totally reblogged on Underthebutton, Penn's version of Bwog (though, as we all know, Bwog is way cooler). Julia is famous once again! Even though the author totally dissed my drawing skills. Touché. Then again, it's a fucking cartoon, asshole, not a thesis. JeSUS. Also, every Columbia student knows who Heironymous Bosch is. If not, then why-the-fuck-am-I-here? Also, as I pointed out to my Penn friend Jon, it's a compliment! Columbia doesn't have fun. I don't remember the last time I wore heels (seriously).
Posted by Julia Alekseyeva at 7:11 PM No comments:

Obama and the Peace Prize

Thankfully I've gotten past my blind Obama obsession of the pre- and post-election period. (Not that it wasn't a lucrative period... it got me on the front page of the Paris metro! Sure, it was by mildly drunk yelling and screaming, but it worked) This is to say that my Obama obsession is now actually capable of some iota of critical thinking. So, when I got the news (from my mother, via gushing email [even though I was the one who blackmailed her into voting Dem]) that Obama won the Nobel Peace Prize, I was skeptical. I did a double take and rolled my eyes. Ok Europe, we get it. You love the guy.

Then this weekend, during a particularly late Philly night I stayed up to watch Cornel West on Real Time with Bill Maher. And Princeton's Professor West made an excellent point: with the Peace prize now permanently attached to Obama's name, he would be less likely to gravitate towards the political center the way he seems to be doing presently. With the Peace prize, Obama can hardly turn into a war president: he has Nelson Mandela to look up to!

One New York Times article said the same thing, in a roundup of the day's blogs:

The Peace Prize Committee, made up of Norwegians, appeared to have anticipated criticism of their choice. (The other Nobel prizes are awarded by a Swedish committee.) The Committee Chairman Thorbjorn Jagland said the prize was often used to encourage laureates rather than reward them for their achievements.

Encourage! Yes. Yes, perhaps I finally understand their decision. Which is not to say that perhaps others are more deserving. But it is, at the very least, understandable. West also made the point that the Nobel Prize is a symbol of how the world perceives Obama, which is true. As another blogger noted,

This Nobel Prize was an investment in future world peace — a bet that by lending some support to the leader of the free world, that leader would be able to achieve something.

So that's that. Let's just hope this Norwegian ploy works. Also, Cornel West is awesome, and a badass. I could listen to him lecture for hours.
Posted by Julia Alekseyeva at 1:55 PM 1 comment:

Went to Philadelphia this weekend. Fascinating city. Trolleys, good food, delicious beer. And, in contrast to NY, everybody seems... happy. It's a good thing.

Came upon this poem a few years ago. To this day it is one of my favorites. I still can't believe I took a seminar with this man last semester.

Ink runs from the corners of my mouth.
There is no happiness like mine.
I have been eating poetry.

The librarian does not believe what she sees.
Her eyes are sad
and she walks with her hands in her dress.

The poems are gone.
The light is dim.
The dogs are on the basement stairs and coming up.

Their eyeballs roll,
their blond legs burn like brush.
The poor librarian begins to stamp her feet and weep.

She does not understand.
When I get on my knees and lick her hand,
she screams.

I am a new man,
I snarl at her and bark,
I romp with joy in the bookish dark.

Also: The Airborne Toxic Event's Sometime Around Midnight. Such a well-composed and catchy song.

And some Brooklyn art: 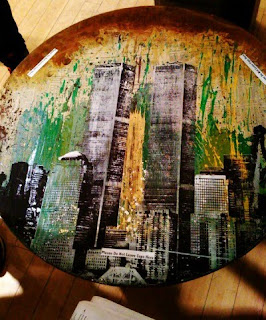 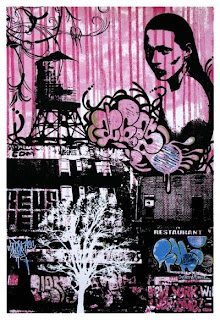 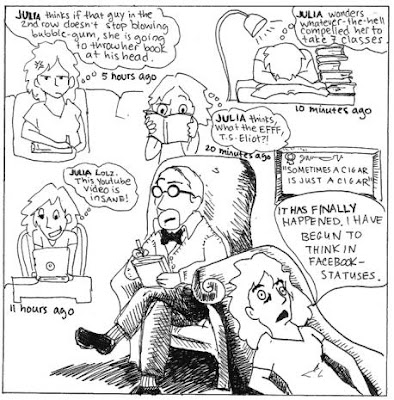 Ok, so I'm a little obsessed with Freud. In my Shakespeare class I fear that I am becoming the resident Freudian. My senior thesis is (crossing fingers here) going to use toooons of Freud to analyze D. H. Lawrence, a project I'm actually getting really excited about. My comic is called "Columbia & its Discontents," so that's number 4... also I've had this weird urge to buy a bowtie, for reasons I don't really understand. You can interpret that any Freudian way you wish.

Going for more of a New Yorker-y look with this comic, though the random vignettes kind of destroy that. I was wary about using my first name, but I figure that a) most people don't even read the goddamn Spec, let alone the comic strip at the bottom left corner of the Opinion page, and b) who knows? I might become famous. Alas, nobody reads the Spec (for good reason).

I’ve stopped going to Michael Moore movies because even though I agree with him politically, his approach is juvenile and offensive. I can feel myself turned off as I watch them, and I agree with him! Imagine how someone who might be on the fence feels! I wish he’d stop and let someone else more effective and subtle step in. It’s too bad, because Roger and Me was actually quite funny and moving. Can’t say that for his more recent works.
--Comment on New York Times website, to Judith Warner's fascinating editorial "The Shame Game"

A good comment, I think. The exact same thing happened to me. As a sophomore in high school, I loved Michael Moore. I saw Bowling for Columbine three times, and then went out and bought the DVD (which is, by the way, scratched beyond recognition. RIP, old friend). I read Stupid White Men and bought Dude, Where's my Country? which was slightly disappointing in comparison to the former. I was a fan. Then Fahrenheit 9/11 happened. I saw it opening day (of course), but absolutely hated it. But then I thought, "Ok, one movie, sure. The next will undoubtedly be better. Michael Moore still has it." That year he was on Rolling Stone's list of the most influential people in America.

And then Sicko, which I STILL DID NOT LIKE even though health care is my #1 issue (#2 is education, #3 social welfare, #4 civil liberties). I thought it was silly. Juvenile. And even incorrect. I agreed with it completely, but what is the point? Yelling at people repeatedly isn't an effective form of rhetoric. And Capitalism, A Love Story? I'd rather not, especially since I like and agree with the guy. I'd just rather not see a film I will inevitably dislike and that will inevitably frustrate me.
Posted by Julia Alekseyeva at 10:24 AM No comments: